“An ounce of prevention is worth a pound of cure” is a saying that applies to pre-emergent herbicides. Whether for a flowerbed or lawn, a pre-emergent herbicide will help prevent new weeds by killing the seedling when it germinates, before it emerges and becomes noticeable. There are several kinds available: corn gluten, Treflan, Dimension, and Prodiamine. Corn gluten is organic and safe to use around vegetables. It only lasts six weeks, which makes timing and reapplying important. Treflan lasts two to three months and can be used in ornamental beds. Dimension lasts three to four months and can be used in ornamental beds and lawns. Prodiamine can only be used in the lawn. These products will prevent good seeds and bad seeds from germinating.  Don’t plant grass seed after applying pre-emergent. Don’t apply pre-emergent to newly seeded lawns until the seed has grown enough to mow twice. This applies to other types of seeds. If you have certain plants that you want to come back from seed don’t apply pre-emergent in that spot. For best results, apply pre-emergent in late March to early April and again in late August. Pre-emergent herbicides won’t kill existing weed plants, but will keep new ones from popping up, helping to reduce your weed problem over time.

SIGN UP FOR OUR EMAILS for weekly arrivals, gardening tips, inspiration & more! 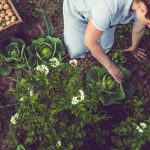